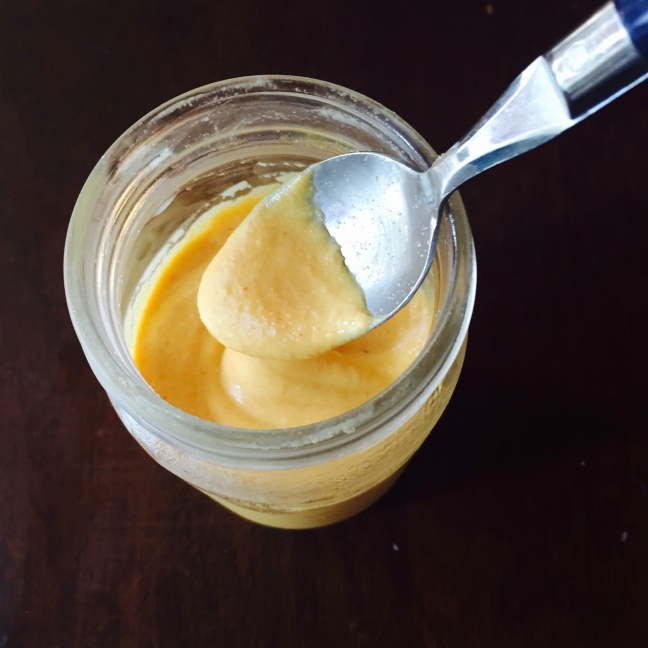 I’m not sure about you, but I love a challenge, especially if it’s one that I set for myself. I geek out over making charts and checklists and planning it all out (like I said, I like the beginnings of things!) and I feel empowered at the idea of doing something just for myself, just because I want to. That’s how this Vegan Cookbook Challenge came to be! I found myself poring over every new cookbook that I bought, lusting after all the beautiful photos of the plant-based recipes, vowing to myself that I would make everything. But life gets in the way and I was busy with jobs and other commitments and would forget about all of the amazing looking recipes that were just sitting there on my bookshelf. When I picked up Angela Liddon’s new book, Oh She Glows Everyday, I was hooked from page one.

I’ve followed Angela’s blog for years and I’ve made SO many of her recipes (like this one, which has become my go-to when I’m craving tacos). Her first book, The Oh She Glows Cookbook, was a huge hit not just for me but for my omnivore family – whenever I make one of Angela’s recipes it’s a crowd-pleaser. So needless to say I was pretty pumped when I saw that she would be releasing a second cookbook, this time focused on quick, easy, flavorful plant-based meals and snacks. I knew that I would love the book, but after flipping through its pages for the first time I was amazed that EVERYTHING LOOKED AWESOME. I WANTED TO MAKE EVERYTHING. Now, we all have our own personal food preferences and we all have some foods that we’re not fans of, but with some basic tweaks on some recipes I would honestly eat everything from Oh She Glows Everyday. So here we are!

Here are my rules for this challenge:

My first week with this cookbook was an interesting one for me in terms of the food I was making and the things I was craving. I was recovering from a laparoscopic surgery and while it was obviously necessary for my body to recover from the long and involved surgery, I was also mentally recovering from the stress and anxiety that I had in the days leading up to the operation. Now, I am someone who LOVES food and I’m constantly thinking about what I am going to eat next. Prior to my surgery I had to be on a clear liquid diet for what ended up being 36 hours and I felt like I was going INSANE. Right before they put me under my surgeon asked me how I was feeling and all I could tell him was that I was really, really hungry. Now, luckily, my appetite wasn’t an issue post-op, so as soon as I went home I was able to eat most things that I wanted in small quantities, but I wasn’t my normal self because I couldn’t cook my own food for a few days. When I got this book I flipped to the page that showed the cheesiest pasta and I knew: that was going to be my first real cooking project when I was feeling better. 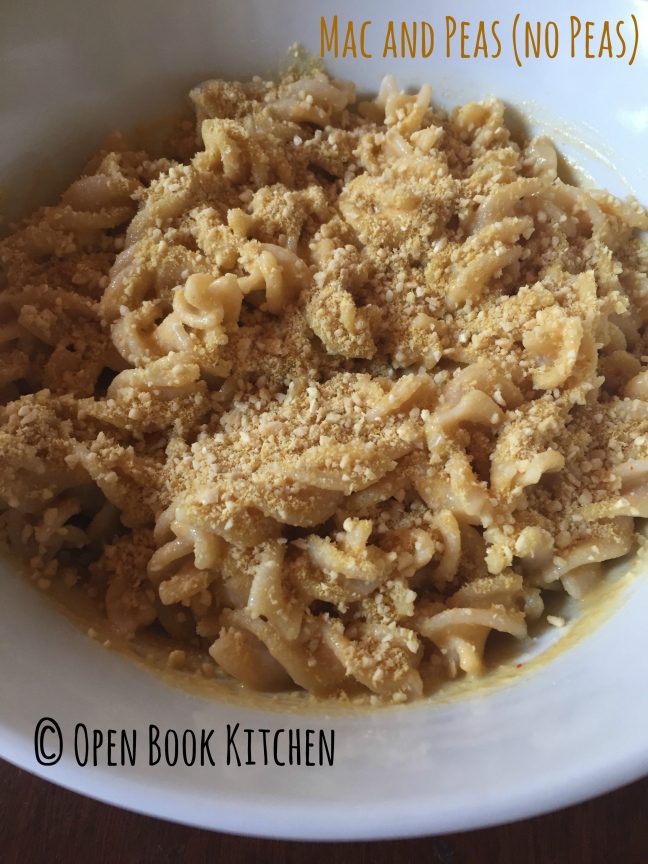 Now, macaroni and cheese was just about the only thing I would eat when I was younger. I’m pretty sure I was kept alive with the bright blue boxes of Kraft and the purple boxes of Annie’s shells! My love of gooey, creamy pasta hasn’t gone away now that I don’t eat dairy anymore – instead I seek out all of the different ways to make “cheese” sauces. I did have one dilemma when I saw Angela’s recipe for “mac and peas” though – the peas! My mindset is that if I’m making mac and cheese, I want it to be pure, simple, like when I was a kid. I LOVE vegetables, I love sneaking vegetables in dishes, and I definitely could have put peas or broccoli in this pasta, but I didn’t. I wanted ooey gooey pasta!

This sauce used potato and carrot in addition to a small amount of cashews to achieve a thick, creamy consistency. The texture of the sauce was awesome – after blending it a while in the Vitamix it was silky smooth and perfect. The flavor was really good too, however I do want to play with it a bit to suit my own preferences. I tried to stick as close to the instructions when making this the first time. I think it is because I am used to making predominantly cashew-based sauces, that the flavor of the potato and carrot introduced something new, which definitely tasted good, but was not quite at my level of “HOLY GRAIL MAC AND CHEESE” status just yet. But still, mac and cheese is mac and cheese and I was happy!

While reheating leftovers of the mac and cheese the next day, I decided to whip together Angela’s recipe for “vegan parmesan cheese” and it did not disappoint. It is essentially just cashews, nutritional yeast, salt and garlic powder all chopped up together in a food processor. I love keeping a recipe like this in the fridge and sprinkling it over EVERYTHING but it was so good on the mac and cheese. It added a nice texture to the creamy pasta and a saltiness that is addicting. I normally make a version of this recipe using toasted pecans instead of cashews, and I think I prefer the flavor of the pecans, but since I almost always have cashews on hand this is a super easy way to elevate a pasta dish at the last minute. 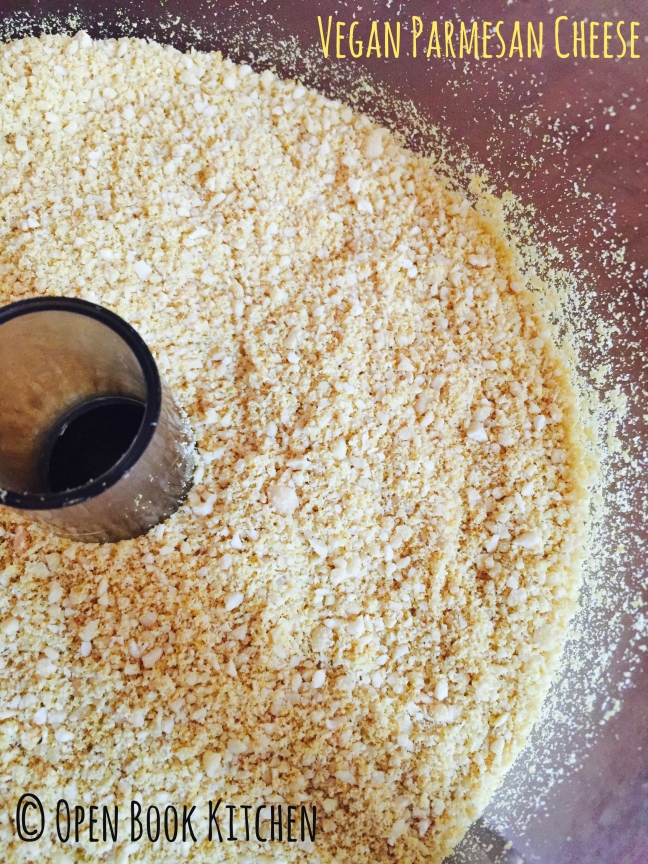 Now, of course I had to make one of Angela’s desserts in my first week. Over the years her dessert recipes have been some of my favorites (check out this recipe for vegan rolos and try to just eat one or two) and her “chocolate-almond espresso cookies” were calling my name. 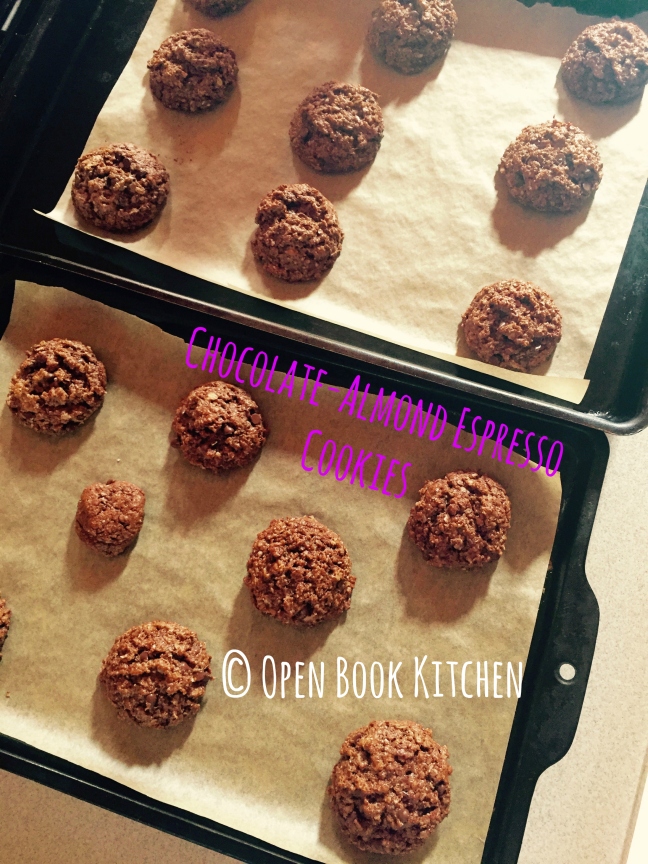 These cookies were chewy, had a slight kick from the instant espresso powder, and slightly salty from the sea salt I sprinkled on top after they were done baking. I love that this recipe used ingredients that I always have on hand and could be made with just two bowls (no food processor or mixer required). This made cleanup a breeze! I stored them in the fridge and would reheat them for 20 seconds in the microwave whenever I wanted a treat and they were insanely good when warmed and melty! My mom (an omnivore) really liked them too which is always awesome when I’m making gluten-free vegan baked goods. I frequently have to remind myself that my taste has changed dramatically since I’ve put some ingredients on the back-burner and some things that I make and LOVE just aren’t quite there yet for some people if they’re used to gluten-full things like cookies. But these were a hit and now I want to make them again! Mmmmm…

I hope everyone has a wonderful start to this week!